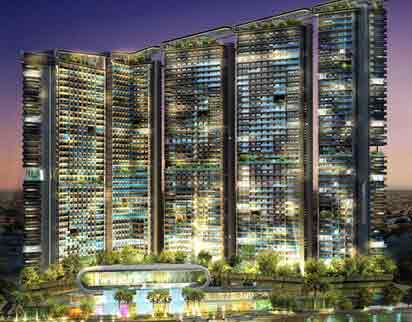 Acqua Private Residences is a residential condominium and mixed-use project by Century Properties. Since its official turn over in 2015, it is now ready for occupancy for those who are seeking to find a residential Eden in what was once an industrial area. This six-tower residential community easily stands out from other residential condominium developments in the area of Mandaluyong or elsewhere in Metro Manila. The one thing that makes it stand out right off the bat is the tropical rainforest design concept. According to the developers at Century Properties, the development team took inspiration from Singapore’s Clark Quay in its development and planning.

Acqua Private Residences is built on a 2.4-hectare property located in a prime location in Coronado Street, Mandaluyong City. This urban community embraces nature by showcasing tropical rainforest designs. Hence, those residents who are living in this condominium won’t feel like they are living in an urban jungle at all. It is the closest that they could get to a country living experience without the need to be away from the city.

The concept of paradise or an Eden is the inspiration for Acqua Private Residences. The developers wanted to exhibit a lifestyle that is abundant and filled with lush greenery. It is also well-watered; hence, you can find a lot of water facilities to reinforce this design concept. Century Properties has done what no other developer has done before – to transport a tropical rainforest to a modern metropolis. The property has dedicated twice of the master-planned community’s size to lush greenery, open spaces, and enchanting water features. Hence, it is the ideal oasis of solitude in the vibrant and busy metropolis of Mandaluyong City.

This residential condominium by Century Properties is a 6-tower development within a 2.4-hectare property. It is strategically located between the meeting point of two booming cities in Metro Manila: Makati and Mandaluyong City. As mentioned above, there are 6 towers that comprise this development. These towers are: Niagara, Sutherland, Dettifoss, Livingstone, Iguazo Yoo, and Novotel Suites Manila.

The Niagara Tower is the first building that was completed from this development project. It is 42 storeys high and offers up to 400 units. This part of the tower is facing Makati, Manila skylines, Mandaluyong and Rockwell. There are 3 unit configurations in this tower: 1-bedroom, 2-bedroom and 3-bedroom units. However, there is a special collection of units known as Acqua Prive. These units were carefully crafted to suit the most discerning clients. As you might have guessed, this tower is named after the famous Niagara Falls.

The second of six towers is Sutherland. Just like Niagara Tower, this one is also named after a waterfall, only this time it is in New Zealand. This is the second building to rise in this massive development plan. This 45-storey tower also offers residents sweeping views of the Manila, Makati and Mandaluyong skylines. Meanwhile, Dettifoss is the third tower to rise from this project. This, too, is named after a waterfall in Iceland. Just like the waterfall to which the name of this tower is inspired from, there is a sense of grandeur to this 46-storey tower. It was officially turned over in 2016.

The Livingstone Tower in Acqua Private Residences is the fourth tower to rise from this development. It is 52 storeys high and was officially turned over in 2016. This tower takes inspiration from the surging rapids of the Congo River. The interior design of this building was handled by an Italian design firm and is the only one of its kind in the world to depict this particular interior design theme.

Iguazu Yoo is the fifth tower to make up this master-planned project. It was named after and inspired by the Iguazu Falls in Brazil and Argentina. It is 50 storeys high and is still in pre-selling status prior to its turn over in 2018. This is similar to Livingstone tower in that it offers a unique interior design, which was handled by renowned Philippine design firm, Starck. The final tower that comprises this property is the Novotel Suites Manila. This is the latest component to this project, which sees Century Properties partner with another major brand in the Philippines. This new tower aims to reinvent the residential and hotel experience landscape in Manila. This project also aims to showcase how Century Properties is evolving into a well-diversified real estate development firm.

The out-of-the-box concept in terms of design and planning further seals the identity of Century Properties in the Philippines. Since it was founded in 1986, it has become one of the top 5 real estate developers in the country. It has received national and global recognition for its award-winning and innovative architectural designs and concepts, of which you can experience with the Acqua Private Residences.

An authentic riverfront property development is now taking shape beside the legendary Pasig River in Mandaluyong City, the Acqua Private Residences Mandaluyong is a private paradise brought to you by Century Properties and only the fortunate few are set to enjoy.

But nevertheless, this rain forest in the middle of the city where nature-instilled setting dominate the place, while the 6 high-rise residential towers stand majestically in the background. The Acqua is what you think it is, a sanctuary in a concrete jungle filled by so many water features and lots of greens that cool the entire complex just like a natural reserved protected heavily for the enjoyment of its residents. This residential condo in Mandaluyong City is highlighted by the uniquely conceived 4-storey country club dubbed as the “Pebbles” where everything you need for a worthy entertainment and amenities are housed. Most of all, the site is teeming with several water attractions that include a man-made fountain, a promenade along the riverbank, an so much more.

The Acqua Private Residences is primarily in-between two of Metro Manila’s most influential cities: Mandaluyong and Makati. The project is primarily located along Coronado Ave., Mandaluyong City, Metro Manila. The site is only separated by the Makati-Mandaluyong Bridge (going to Bel Air area of Makati) which is less than 500 meters to west of the Acqua, while the City of Mandaluyong Science High School is just beside the residence. The impressive location is also realized with its proximity to the other bridge that also connect the two powerful cities on the way to the Rockwell Center, the Estrella Bridge, which is only 200 meters to the east of the site. Furthermore, this condo community has for its immediate neighbors the Centuria Medical Makati, Mandaluyong City Medical Center, Unciano General Hospital, Halcyon Health Center, the Century City Mall, Trump Tower, Century City, Makati City Hall, Power Plant Cinema, Power Plant Mall, Rockwell Center, Rizal Technological University, the Ateneo Professional Schools, Makati High School, St. Therese Private School, and other establishments and institutions within the site’s 1km radius.

Enjoy the privilege of experiencing every day the Acqua Private Residences’ most comprehensive list of nature-inspired amenities that you can only witness inside this wonderland of enclave. With only 14 residential units for every floor, the project has one of the lowest densities this side of the city. The south units are facing Makati, where the stunning view of city’s skyline could be had, while the north units are facing Mandaluyong and Manila. The units come in 1-BR, 2-BR Corner, 2-BR with private garden, 3-BR Bi-level units with private garden, and 3-BR units with Sky Garden. The 1-BR and 2-BR units that could be combined to form a much larger unit. These units are truly inspiring for starting and growing families.

24 7 chat support to this website is provided by Chat Agents.

Century Properties Acqua Private Residences in Mandaluyong City, Philippines is a premier Condo project available for sale. If you're looking to rent or purchase Acqua Private Residences, then check here first. We have full details of Acqua Private Residences updated regularly as well as everything you need to know about the availing and booking process, broken down into stages that includes selecting a unit, choosing a payment plan and buying your dream home at the right price. For price list, free site tripping or showroom visit, personalized service, model house, unit plans, floor plans, payment terms, CHAT LIVE with an agent 24x7. Always only buy from PRC licensed Real Estate Brokers and Agents.

Why Invest In  Acqua Private Residences

The Pebble and other world-class amenities

Highlighted by the Pebble, a triangular shaped 4-storey building as the main core of amenities of the Acqua Private Residences Mandaluyong, it is set to become the symbol of a new kind of living. This iconic structure will house the project’s Country Club by the water. The Pebble is a glittering structure with gentle river stone having a large cut in front that allows an eagle’s eye view of the frontage overlooking the legendary Pasig River and 3 waterfalls cutting through the facade that seems to flow to the majestic river. Here, you can lounge, rejuvenates, and enjoy the building’s fantastic offering of innovative amenities like the lap pool, a lagoon pool, wellness and fitness center, basketball and tennis courts, hot and cold Jacuzzi, changing rooms, juice bar, and so much more!

Below the waterfalls and at the ground floor of the Pebble, experience a romantic evening walk with your loved one at the Riverwalk Promenade. Here, you can also do shopping, dining, and enjoy the stunning scenery of Makati. The Riverwalk Promenade is a pleasant expanse of fine restaurants, cafes, boutique, bars, and designer stores.

This condo for sale in Mandaluyong has lush vegetation, sits on a 2.4-hectare of wide open spaces and the Acqua Private Residences is one-of-a-kind of luscious sanctuary that mimics a tropical oasis which you can never find anywhere else in the metro. This unique environment is what matters most to nature-loving individuals where their investments are not only aimed in gaining the highest property appreciation over time but also an environment that will give them the utmost health and wellness benefits compared to other residential developments in the city.

Partnering with Broadway Malyan, Century Properties had made the right decision. Century Properties is one of the largest privately-owned real estate firms in the Philippines and one of the largest in Asia. Its partnership with Broadway Malyan, the world’s leading and award-winning team of architects, urbanists, and design specialists, have conceived and created the Philippines’ highly-appreciated residential developments admired worldwide. Broadway Malyan is the firm responsible for some of the world’s waterfront developments, such as the Al-Bandar in the UAE (Abu Dhabi), Vauxhall Tower (London), and the Battersea Reach (London), among others. The Acqua Private Residences Mandaluyong promises to be another feather in the caps of these two masters of residential developments.